If those reflexes are not present, baby may have a neurologic troubble


Our team came in Lumbini by the request of Claud Briot, in order to run experiment link to biological
water analyse thanks to our background. We worked as Laboratory technician and expert on water analyses
for Aurelien Colimard, and as engineers in agriculture and specialist on water and waste management.


Accommodation and logistic during the volunteering period


Our project was manage with the help of Dr Claude Briot from Lumbini French Association.
Indeed Dr Claude Briot did the link between us and IBS by finding a place to stay and to eat and by
mapping and listing all the schools and the pumps that we need for our work. So we stayed during 3 weeks
on the 2nd  floor of IBS hospital and ate in Lumbini.
For most of our movements from IBS to Lumbini we use to walk. But if we had to go further we could
borrow some bikes to the Ramu family which are close to IBS. Furthermore, if one of us had to go far
or had to collect many water sample, he could go by motorbike with Dinesh as guide and driver.


Pedagogy and awareness campaign in schools

Aims of our actions


In schools, our main goals are to analyse the water from schools water pump and to teach and make
students aware on three different topics which are:

We try to make all our class interactive and to speak only in English with students, making them
repeating English words. We believe that with ludic experiments it is easier for them to understand,
learn and memorise.

Logistic and procedure of our awareness campaign.

About the awareness campaign, we start with a first list with some school where we had to go.
But the list evolve, some new school where add thanks to some local Nepali young men who helps us.

For each school the procedure is the same:

-              We try to meet the principal of the selected school few days before to present
ourselves and avert that we want to teach in his school. This first discussion allow us to know
how many classes and students there are in each school. We also decide how many class we could
take.
-              Then we come back with our teaching materials in order to do our presentation.
Depending on the real number of student we adapt our presentation by reorganizing the classes
or not.
-              When the class is ready we start our presentation, we adapt our syllabus on their
effective knowledge.
-              With one class of each school we go with all students to sample the water from the
pipe where they drink. By this way we show them how we do have to sample the water
(with gloves and sterile tubes) and explain how we will analyse the water.
-        Finally we come back after about 1 week to give the water analyses results to the director.
When the results shows any kind of contamination we try to speak with the director of the
school alone.


The ways to the school were done thanks to Ramu’s bikes. Sometimes, if we know that we will have
some trouble with the English level of the students, we asked to have an English teacher during our
presentation, or we asked for the help of Asok Bekey, a local young boy who speak a good English.

We tried to go in all schools around Lumbini, and to take at least classes 8 to 10 in each school.
Sometimes we gathered classes in order to take less time in school and to be able to visit more of
them.
We teach and take water in the following schools:

Beginning of the water cycle, on the board

Syllabus of our interventions

We choose to make class only for the oldest student (from class 7 to 10), because they have
more scientific skills and a better English level and so, it is easier to communicate with them.
First, we make a presentation of ourselves. We try to show them where is France on a map, when
there is one on the school. We explain them that we are here working with IBS and Lumbini
France association, in order to teach but also to make water analyses. Then, the class start: 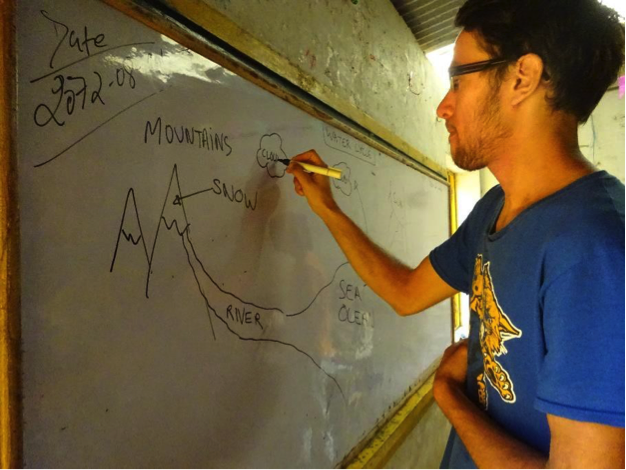 We try to make them draw the water cycle on the board, asking them “Where can you find water?”.
Then, we explain them that people, animals and all the nature is compose by water. We try to make
them guess that about 70% of our body is water. We also talked about the water transformations like
evaporation, evapotranspiration, condensation and infiltration and sublimation. We explain that if we
pollute water once, the pollution will go everywhere on the cycle, and so, it introduce the next part.

We try to make them guess what can pollute the water. We wanted to hear back “toilets”,
“pesticides” and any kind of physical pollution. Then, we classify the pollutions in 3 groups
(physical, chemical and bacteriological pollution). At that time, we ask them if they know how to
remove the pollution on water. To explain this, we show them a filtration experiment with rocks
and sand filter. This experiment also showed to the children that they should drink underground water
rather than river water. We ask to the children if bacteria could be removed thank to a filtration.
In fact, this is possible, but with a really small filter because of the size of a bacteria (0, 0002 mm).
Thanks to this part, we also tell them that they will have less risk to have bacteria in their water with
a deeper well. Otherwise, in order to kill bacteria, they should boil the water 20 minutes.
We also speak about the use of chemicals to kill bacteria (as chlorine for example).
When it is possible (level good enough in the   class), we speak about how we can remove the chemicals,
and how we do that in France (in fact here the chemical pollution is not a main problem).

As we previously explain how to clean water, we ask them whythey use water.
With the answers, we create two main categories: one which use clean water, and the other one which
use dirty water. Thanks to this, we speak about hygiene and hand washing.
We ask a student to come and show us how he wash his hands. Then, we explain them the 6 step to
wash their hands, and wemake them repeat after us. The 6 steps are: “in the front”, “in the back”,
“between the fingers”, “one by one”, “the nails” and to finish “the wrist”, and after, we do the same
with the other hand. At that point, we explain them the importance of soap to clean their hands.
We explain that soap kill bacteria and help to remove dust. We remind them they should wash their
hands a lot of time in the day (before every healthy action and after every dirty one), during 30 seconds
each time.

We  finish  with  a  game.  We  show  them some waste, and they have to guess the time it would
stay in the nature if we drop it. We dothat with fruits, paper, plastic, glass and battery. After that game,
we told them what to do with each waste. All of them should be collect. Green one’s should be put in
gardens as natural fertilizer, papers burn and compost, plastic reuse or burn, glass reuse or stock,
and batteries stock.

Because every school are different, because of the current political trouble in TeraÏ, or just because
of the specific way of living in Nepalwe had to manage some unexpected situations.
Different troubles appeared during each steps of our awareness campaign.

Sometimes we had trouble to go to school, to teach or to plan the class. With the actual situation in
Nepal, some of our classes were deleted because of the strikes. In that case, directors of school have to
close their school, and so we were able to teach in fewer classes that what were planned.

In most of the School we hadn’t any problem to describe our project and they were glad to manage their
school for our presentation. But on only one school we were totally refused, it was on the only Catholic
school. In another school, a Muslim school, we were only able to teach to boys or little girls.
The other girls were not allowed to have men teachers.

When we came back to schools to teach, after we planned it with directors, we could have some surprises.
Sometimes, there were some unexpected exams and so we had to take classes after them, and so to
reduce the teaching time, and the student attentiveness.

In some school, especially on the governmental school, the difference between the amount of student
planned and the effective amount of student could be divide by two or three. So some quick adaptations
should be run in order to have enough student in one class.

Thanks to the easy start or our presentation we are able to define the level of English of the students
(and of the teacher) and their general knowledges. And sometimes the English level of student doesn’t
make them able to understand our presentation, this situation appear mainly in temple when we teach
to little monks or in Muslim school. Fortunately, there are often some teachers who speak a good English
to translate, and otherwise we planned to ask our translator to come with us. When the general
knowledge of one class is no good,we try to work more with their English by making them repeating
words and sentence in English. But once, we had a big problem with aMuslim school because children
were not allowed to speak English.

When we gave back the results to schools, especially bad results, most of the directors asked
us what to do. We just warn them thatstudents should not drink the water from the pipe.
Even if there are actually no problem of disease in the school, some bad bacteria could harm some
weak people. If there were a nursery in the school we told them to filter or to add chemicals in water.
Otherwise we advise them to warn the students that they could use the water to wash their hands,
but not to drink it. They should bring a water bottle from their home. 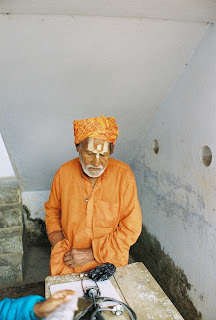 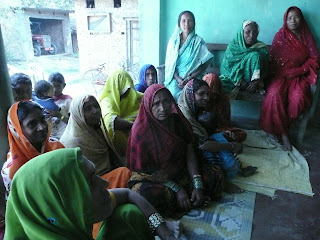 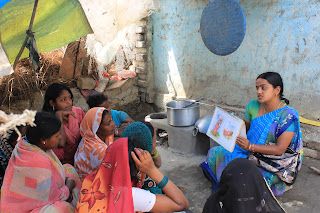